On turbocharged vehicles, like the Mustang EcoBoost, a downpipe is what carries exhaust gases from the turbine housing to the rest of the exhaust system. Downpipes can also refer to the tubing in older cars that runs straight from the exhaust manifold to the rest of the exhaust. Aftermarket downpipes are available that can further improve performance, but it’s important to note that not all of these modifications may be legal in your state.

Your EcoBoost Mustang came with a stock downpipe equipped with a catalytic converter. Catalytic converters run exhaust gas through a honeycomb that’s coated in rare metals like platinum and palladium. These metals act as a catalyst, and re-burn your exhaust fumes, allowing fewer harmful gases to exit.

This is a good feature; nitrous dioxide, in particular, has been linked to a significantly increased risk of lung cancer, but it can make your vehicle less powerful as well. 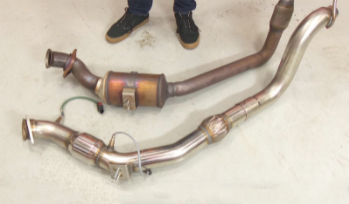 Aftermarket downpipes often come with high-flow catalytic converters installed. These are designed to impede the flow of exhaust fumes less than the stock catalytic converter does and will work with your specific vehicle more efficiently.

Because states have different restrictions for aftermarket catalytic converters, you should check your individual state’s requirements before purchasing an aftermarket downpipe. You may also need a tune following installation because it is likely that you’ll see a “check engine” light come on after installation. That’s normal and easily cleared, but if it’s not removed before your vehicle’s emission inspection, it's likely that it won’t pass. 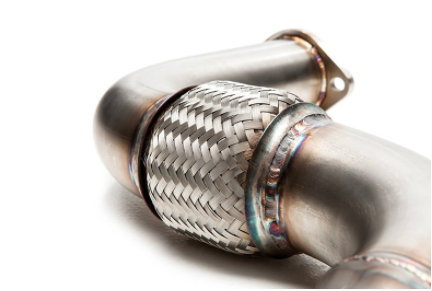 Off-road downpipes, true to their name, are only legal for off-road performance. If you have a performance vehicle that only ever sees track use, then these downpipes show the largest performance gains and change the sound of the exhaust to a rumble so deep your neighbors will certainly be upset if you ever do try to drive it on the street.

By removing the catalytic converter entirely off-road downpipes are able to offer a completely unrestricted exhaust flow. This is not street-legal in any state and if you are caught with it even in a state without emissions testing you will get a ticket. Fortunately, they don’t issue emissions tickets on the track.

Without the catalytic converter, there is nothing stopping the exhaust fumes from affecting you either, so it’s important to try to limit your exposure or wear protective equipment to prevent yourself from inhaling unfiltered exhaust.

Installing a downpipe is relatively easy, the most challenging part is ensuring that everything is properly replaced and installed, including the O2 sensors. In this CJ’s video, Bill shows us how to do a basic downpipe install.

If you have a turbo engine, then upgrading your downpipe is an easy way to see big performance increases with relatively minimal effort. By ensuring that your downpipe is legal in your state, you can also avoid tickets.

With a variety of aftermarket downpipes available, one of the easiest ways to narrow down your options is to think about where you think you’ll be using your Mustang most often. If you’re frequently driving on streets or around people, then buying a catted downpipe will give you a healthy mix of safe-to-breathe air and performance boosts. Don't forget to check your local laws regarding catalytic converters as well.

But a non-catted downpipe will provide the surest performance boosts, and if you’re only using your car as a weekend racer, it's likely worth the trade-offs.

If you're looking to get some aftermarket downpipes for your EcoBoost Mustang, check out our full selection to find the best option for your pony.