The original purpose of an exhaust system was to safely route exhaust gases from the engine so they can be exhausted into the environment, while also providing attenuation of combustion noise. Exhaust gas, however, contains components that are harmful to human health and/or the environment. As a consequence, emission levels of these exhaust gas components became regulated. Since regulated emission levels are often much lower than that which can be achieved through in-cylinder control measures, the exhaust gas must be treated after it leaves the engine. Thus, while exhaust systems continue to serve their original functions, they have evolved into one of the critical elements used for pollution control and abatement in modern engines.

An exhaust system from a diesel passenger car is illustrated in Figure 1. The exhaust system is typically connected to the exhaust manifold, which collects exhaust gases from the engine cylinders’ exhaust ports. In light-duty applications, catalytic converters and diesel particulate filters (DPF) can be placed either in the close-coupled position to the exhaust manifold (the converter in Figure 1) or in the underfloor position (the particulate filter in Figure 1). The choice of location is determined by the availability of space and the desired temperature profile, with the close-coupled location providing exposure to the highest possible exhaust gas temperatures. 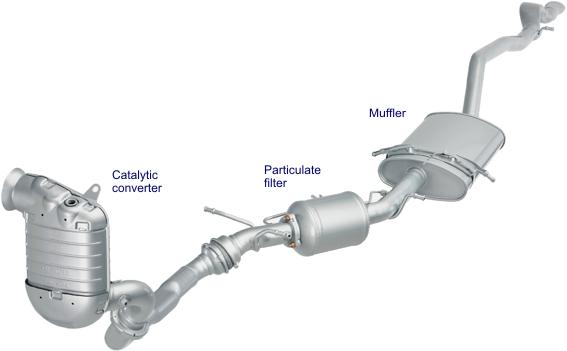 In general, the exhaust system includes the following components:

· Decoupling elements, which connect the exhaust manifold with the rest of the exhaust system.

The aftertreatment devices and their piping are sometimes referred to as the “hot end” of the exhaust system, while the mufflers and the tailpipes are the“cold end”of the exhaust system. The hot end piping may include the “downpipe” or “front pipe” (not present in the configuration shown in Figure 1) which connects the exhaust manifold with the catalytic converter, as well as piping between the catalyst and the particulate filter. The aftertreatment system is connected with the muffler by the “center pipe” The exposure to high temperature, along with other factors such as strength requirements and chemical exposure, determine the choice of exhaust system materials.

Exhaust Brakes. Exhaust systems may also include a number of specialized components. Some diesel trucks are equipped with an exhaust brake, which uses the exhaust gas pressure for vehicle braking, to ease the demands on wheel brakes and increase their longevity. By activating a throttle valve placed in the exhaust system when the engine is producing no output and braking is required, exhaust backpressure and subsequently the torque required to rotate the engine is increased. In engines equipped with a variable geometry turbine (VGT), the turbine vanes may be used to throttle the exhaust flow instead of a separate throttle valve. The effectiveness of exhaust brakes can be improved with a feature that holds the exhaust valve open continuously (“bleeder brake”).This can be accomplished with an actuator that pushes the exhaust valve and keeps it open through all four engine strokes.

Exhaust brakes can be fitted to a variety of medium-duty diesel engines including heavy pick-up trucks intended to pull relatively heavy trailers. Their application and effectiveness is limited by the maximum pressure that the exhaust system components upstream of the throttling valve can sustain. Exhaust brakes have little impact on exhaust system noise.

Exhaust brakes are only one way to use the engine to aid in vehicle deceleration. Compression release brakes—sometimes referred to as engine brakes—open the exhaust valve near the top of the compression stroke and release the compressed air into the exhaust system before it is able to push the piston down during the expansion stroke. Compression release brakes are often incorporated directly into heavy-duty diesel engines such as those used on Class 8 trucks. They provide a significantly higher braking effect than exhaust brakes without increasing exhaust system backpressure. They are however, considerably more costly and require special noise suppression measures to avoid excessive exhaust system noise.

Waste Heat Recovery. Future exhaust systems may also include exhaust gas energy recovery systems. In the diesel engine, the exhaust gas enthalpy represents a significant fraction of the chemical energy of the fuel—up to over 30%—which is one of the most significant sources of thermal efficiency loss. Exhaust heat recovery systems may range from simple heat exchangers to complex technologies such as thermoelectrics. An example vehicle with an exhaust gas heat exchanger is the 2006 Citroen C4 Picasso, where waste exhaust heat transferred via the cooling system is used to more rapidly heat the cabin. Research aimed at using thermoelectric generators to produce electricity from waste exhaust heat in light- and heavy-duty diesel engines has been sponsored by the US Department of Energy