Home / News / What is Car Exhaust System and How it Works?

What is Car Exhaust System and How it Works?

What is Car Exhaust System and How it Works? 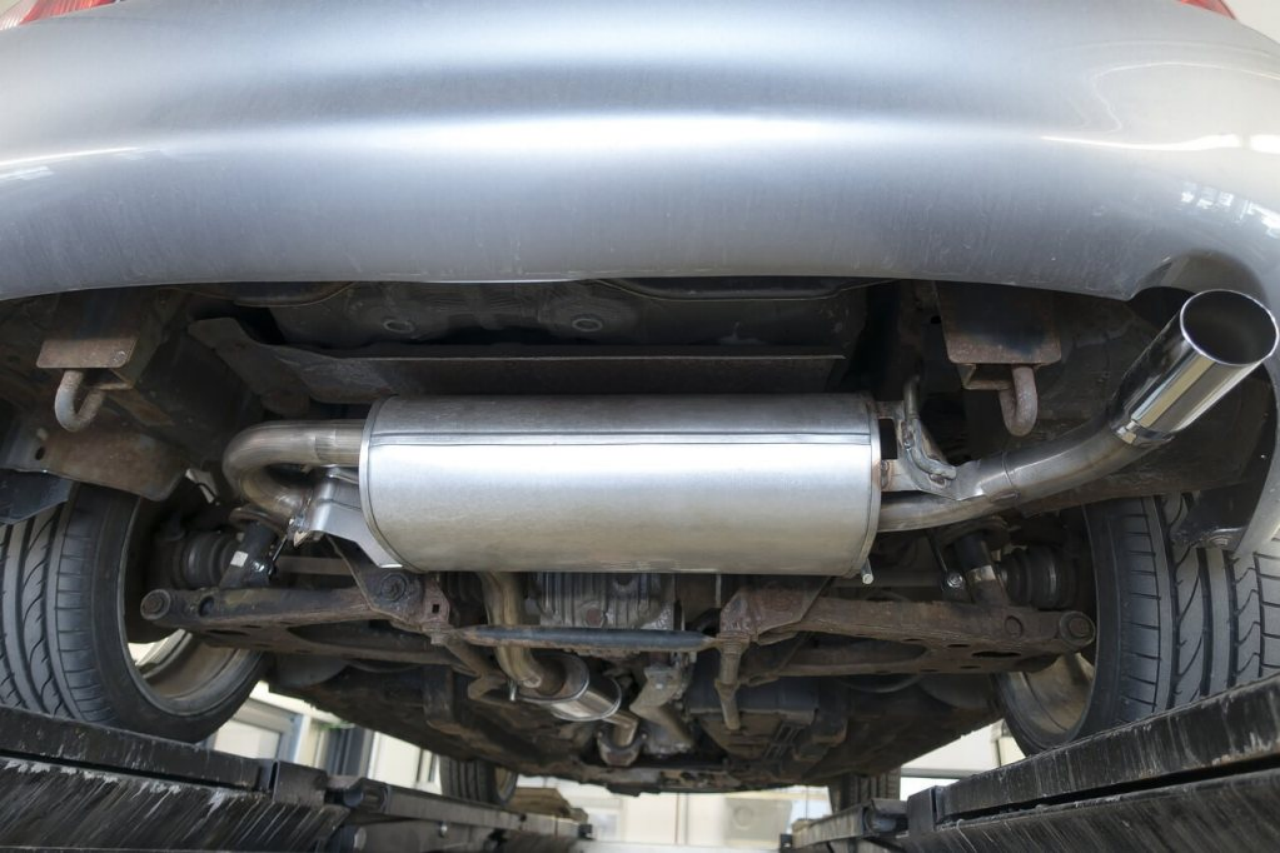 Car exhaust system is a important part of our car – if you don’t like to get poisoned!

How would you feel if you have to wear a heavy-duty gas mask whenever you drive a car? Not a pleasant experience, I suppose. Luckily, we don’t need to do that but we owe it all to our car’s exhaust system.

Exhaust system collects, purify, and expels harmful substances away from the car’s occupants.

In the article below you will find more about…

*What makes up our car exhaust system?

Parts of a Car Exhaust System

Just like how a movie always introduces its cast, here are some of the main parts of a car exhaust system.

Exhaust manifold is a single part that guides and delivers the exhaust fumes from our car engine cylinder into the exhaust pipe. It is usually made from cast-iron or stainless steel, although you can find custom exhaust manifold that are coated with ceramic or even polished chrome. 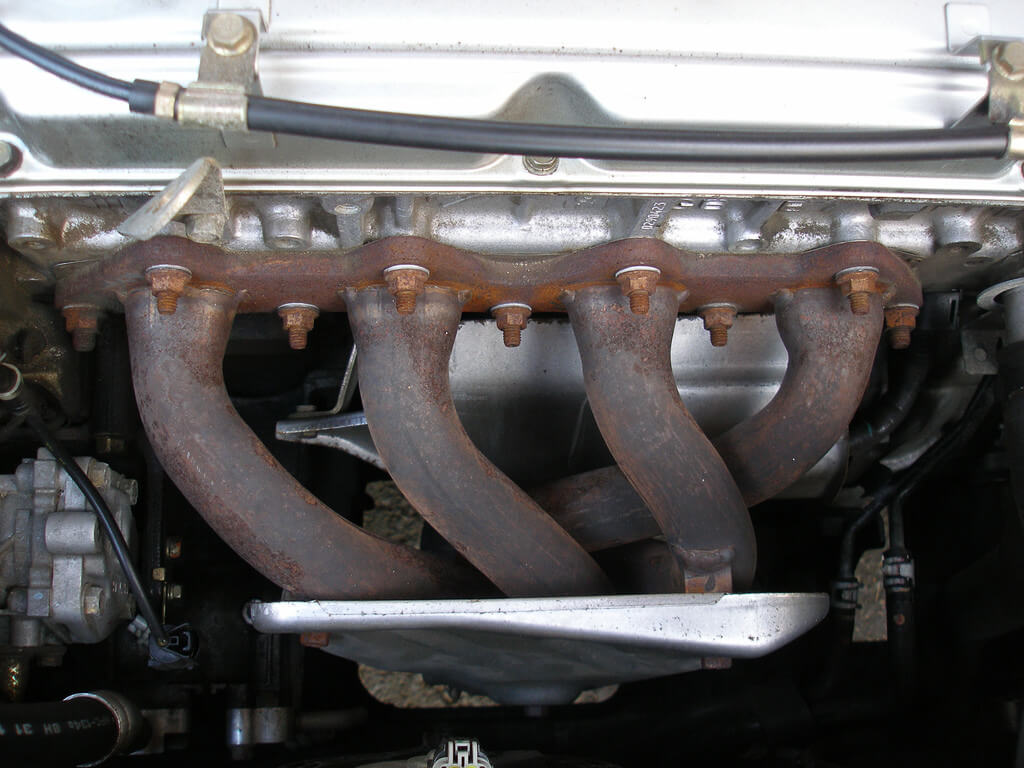 As you can see, exhaust manifolds are the red hot part. It converges the gas into a singular pipe. 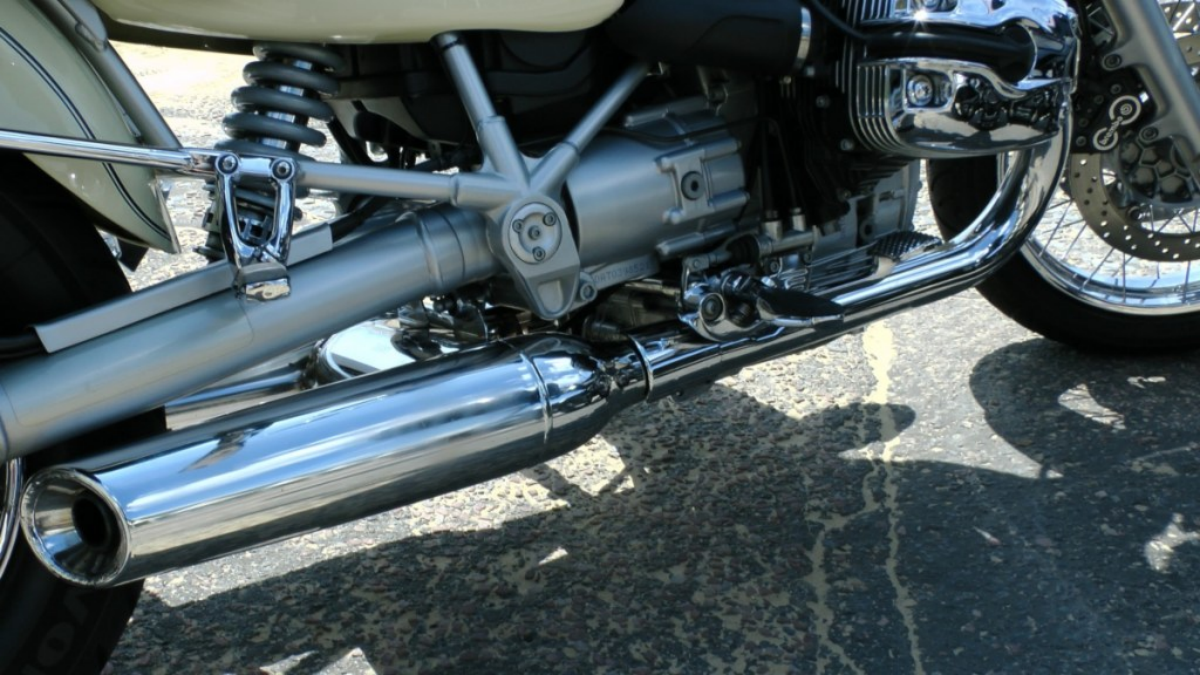 Exhaust pipes are just aluminium tubing that gas flows in. It’s like a sewer for gas.

Catalytic converter looks like a large metal box and you can see it if you jack your car up. It sole mission in life is to make the exhaust gas less harmful by converting unburned hydrocarbons, nitrogen and carbon monoxide into carbon dioxide and water. Its playing an increasingly significant role due to the increased regulation of air pollution in the car industry. 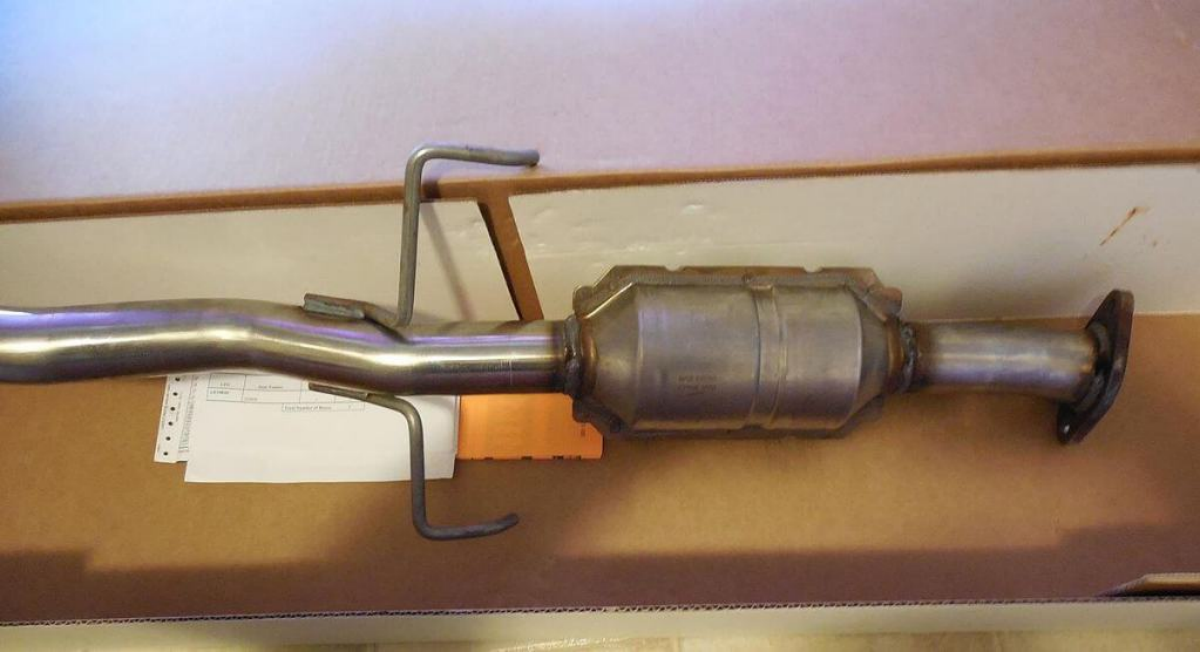 Catalytic converters are expensive! Mostly because of the precious elements found within it. 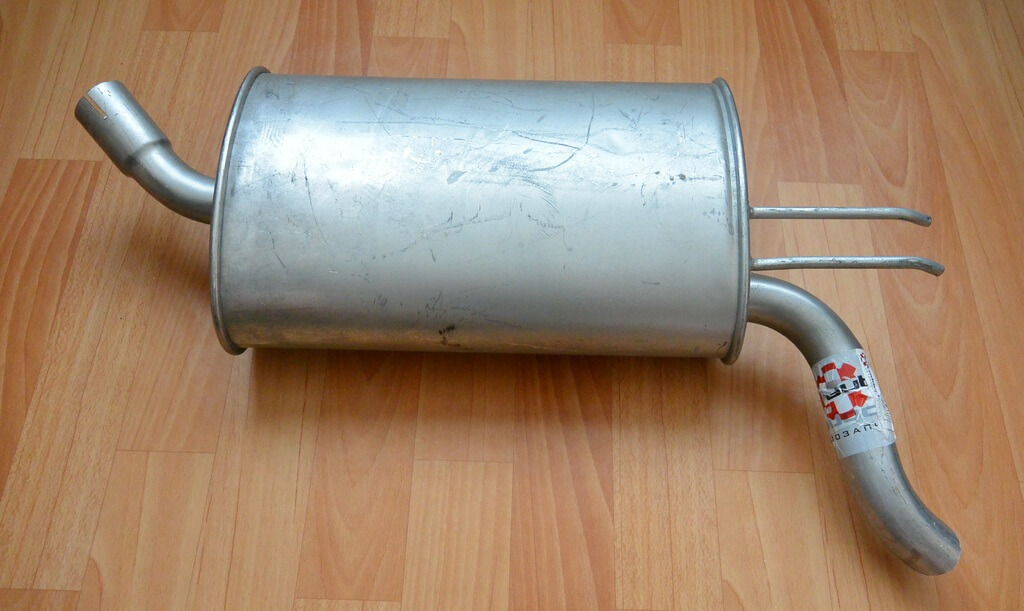 “mh mh hmm hmhm”. Muffler quiet down the noise made by exhaust gas.

How Does a Car Exhaust System Works?

The journey of an exhaust gas starts from the car engine and eventually make its way to the tailpipe found at the rear of our vehicle.

In this part of the article, we have broken it down to 5 phases that tells you where it come from, what we do to it, and how we get rid of it. Enjoy!

When we start our car, the engine combusts petrol to generate power. Most passenger car runs on 4 strokes engine, which is a cycle between intake, compression, power, and exhaust stroke in that particular order. It helps to understand how car engine works to get a full picture. 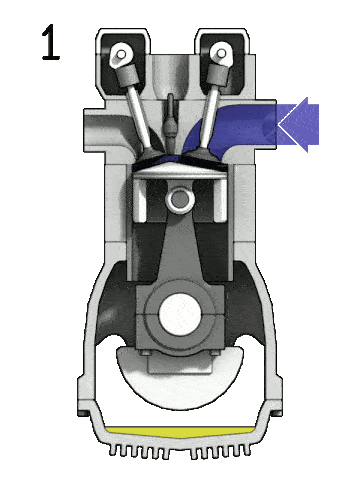 If you cut the car engine in half, this is how a 4-stroke engine will look like.

1.Intake Stroke. The first stroke opens up the intake valve, which allows the air-fuel mixture to enter the cylinder.

2.Compression Stroke. On the second stroke, both the intake valve and exhaust valve are closed. So, when the pistons move upward, it compresses the air-fuel mixture.

3.Power Stroke. When the piston reaches the top, the spark plug ignites the air-fuel mixture, producing a downward thrust that is harvested as rotational power that moves our car.

4.Exhaust Stroke. The forth stroke opens up the exhaust valve. As the piston moves upward again, it forces the exhaust gas out of our car engine, and into the exhaust manifold.

With that, the engine produces power. However, this process also produces exhaust gas as a by-product that we want to get rid of. It is a toxic fume that is hazardous to the car occupants and the environment. This is where the exhaust system steps in.

Exhaust manifold is basically a funnel. It is designed in such a way that each “funnel” meets with one of the engine exhaust port and then converges into a single pipe that leads directly to the rest of the exhaust system.

Very much like many small roads leading into a single highway, the purpose of exhaust manifold is to guide and collect the exhaust gases from all the engine cylinders and converges them into one single opening, known as the front pipe.

From there, the exhaust gas goes through the catalytic converter.

Catalytic converter are like filters, except for gases. It purifies the gases. At this stage, the exhaust gases are a mixture of six different gases, namely…

The first three on the list are not toxic while the subsequent three are extremely toxic to the car occupants and the environment. With the increasing awareness of global warming and environmental concerns, we can’t just release them into the atmosphere!

Fun fact. The catalytic converter is capable of purifying (up to 90% of the harmful substances!). 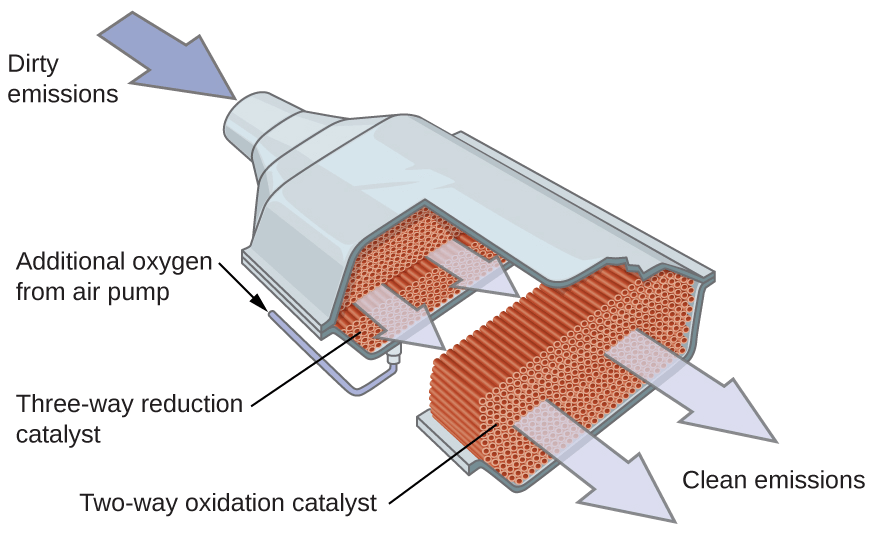 It’s quite magical. You shoot exhaust gas through the catalytic converter, and you get clean emission out the other end. All this owing to the honeycomb structure and catalysts.

The catalyst induces a chemical reaction that converts the harmful elements found in exhaust gas (e.g: carbon monoxide and hydrogen monoxide) into harmless inert gases. It is achieved through either oxidation or reduction process. As the exhaust gas flows through the catalytic converter, it reacts the the catalyst and gets turned into less harmful substances.

At this stage, the exhaust gases are purified and is ready to be removed from the car.

As the purified exhaust gases exits the catalytic converter at a very high speed, it creates unpleasantly loud noises, loud enough for you to hate driving altogether. Thankfully, we don’t hear that, owing to the silencer.

Befitting to the name it was given, silencer a.k.a muffler, reduces the noise level of exhaust gases. You don’t realise its importance because you don’t get to “hear” it. It’s something that you can only truly appreciate when the muffler is damaged.

Let’s take a step back and see how sound are produced. Sound waves are produced by an alternating pressure waves that looks like this.

Sound waves go up and down like a hill.

This alternating pressure wave comes by as a nature of a cyclic motion, very much like a vibrating guitar string or a 4-stroke engines. In the case of a car exhaust system, here’s how it works.

I know, it’s a bit tough to wrap your head around this. But here’s another example.

If an alternating pressure wave produces noise, what happens if you take the inverse and put them together? Interestingly, it cancels each other out. Like this.

This is called destructive interference. In another words, if a + 5 sound meets with a – 5 sound, you get a 0. This is actually how noise cancelling headphone fundamentally works. 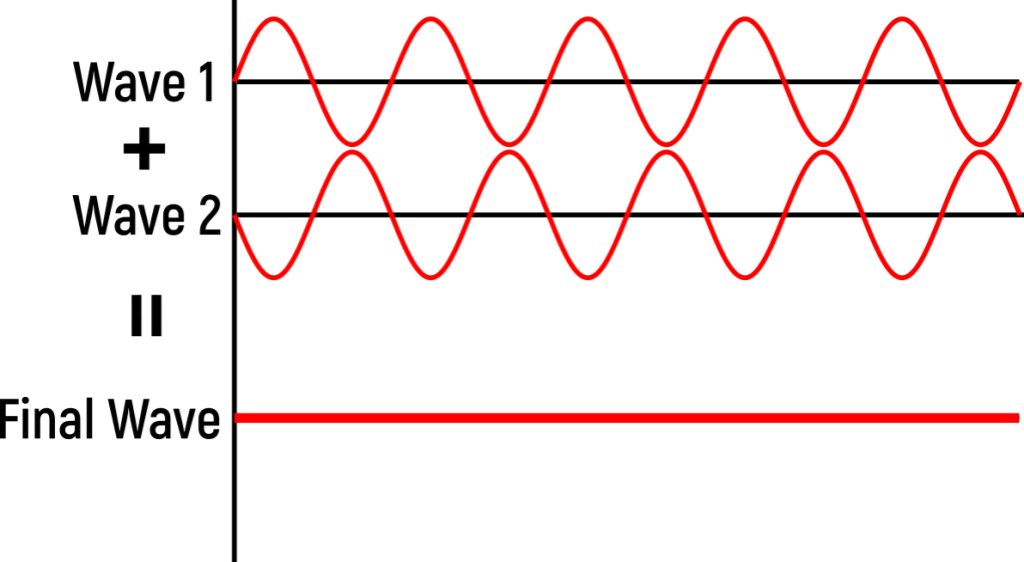 As you can see, if you match a “peak” of wave 1 with the “troughs” of wave 2 and vice versa, you will end up with a flat line.

So if you open up the muffler, it is a simple set of tubes engineered to reflect sound waves. By reflecting them, the sound wave will meet with its counterpart, which becomes self cancelling.

Here’s a great video that may help.

This video did a great job explaining everything that you need to know about muffler. It even shows you the inside of a muffler.

As the noise level reduces, the harmless exhaust gas eventually reaches the tailpipe.

Finally, the exhaust gas exits from the tailpipe found at the rear of our vehicles, therefore channeling the gases away from the occupants of the car.

*channeled away from the engine and the car occupants.

*less harmful to the environment.

*not projecting loud noise that are uncalled for on the highway.

Car exhaust system is like a trash management system, but for gas. It improves our driving comfort by reducing noise level, while keeping us safe from toxic fumes. It is one of the system that is often overlooked, undervalued, but yet so important.